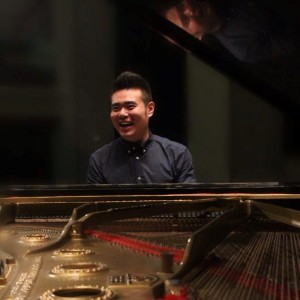 Yibing Zhang began studying piano from 3 years old in China. He hold the bachelor degree and the master degree from The Central Conservatory of Music in China and New England Conservatory in USA. In 2014, he got the full scholarship from the music school of University of North Texas for his Graduate Artist Certificate and teaching fellowship.

In 2004, he won the third prize of Asia-Pacific Regional of the International Robert Schumann Piano Competition. In 2007, he got the full scholarship from the summer academy of Allegro Vivo in Austria. In 2008, he won the third prize in China Central Television Cup Piano and Violin Competition and played with renowned violinist Mr.Sheng Zhongguo in New Year Concert at Chinese National Center for Performing Arts. He has coorperated with China Philharmonic Orchestra at CCTV (China Central Television) in 2009. He has not only made a outstanding achievement in the field of classical music, and also good at and interested in Jazz, Tango and Pop music. In 2008, he has played the Piazzolla’s Concerto para Quintet, The 4 Seasons of Buenos Aires, Libertango, and Operation tango in Tango Night Concert with Prof. Cao Xiaoqing (Accordion) and his Tango Quintet at China National Center for Performing Arts, and Obtained the recognition in the music industry. He was invited as the musical coach from the International Chinese Arts festival in Singapore in the summer of 2013.