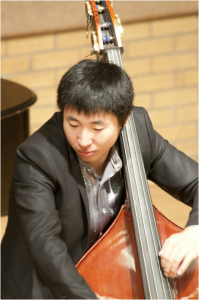 Born into a family of Musician in China. Mr. Lu start Piano training from 3 years old. Chengyin Lu has established himself as one of the leading musician of his generation. Mr. Lu received his bachelor of music Degree from Central Conservatory of Music, master of music Degree from New England Conservatory and Graduate Artist Certificate from University of North Texas where he study with Jeff Bradetich ,Chair of International Double Bass  Association. Don Palma, Grammy winner and Professor from both Yale University and NEC and Edwin Baker Principal bassists of Boston Symphony.

Mr. Lu has given many recitals and Master Class in Both Unite States and China. Which include University of North Texas, New England Conservatory, University of  Pan America. He gave the open recital for International music Festival in Texas. He also the founding member of TRY Ensemble.Mr. Lu move to Plano in 2015 with his wife who are the young cellist .

Mr. Lu is the member of Richardson Symphony and Monroe Symphony. He is the Double Bass major Teaching Fellowship of University of North Texas, in 2014.Plano ISD, Allen ISD, Denton ISD and Dallas ISD.